2. I was sick with some stomach virus for like 10 days, but luckily I get better in time for Christmas.

3. The good side of the virus was that I couldn’t eat nd lost some weight 🙂

4. Christmas Eve was spent at my parents house. Good food, Family and presents 🙂

5. The children really enjoyed Christmas, they got some nice gifts. BB#1 was most happy with his Olympus Binoculars. He also got some ice skates, so we will have to go to the ice skating ring to try it out.

6. On Saturday I took BB#1 to Budapest with a train to visit my brother and his girlfriend. We had a lovely day. The sun was shining and we spent the day walking, shopping and eating 🙂

7. It turned out we picked the best day to travel, because on sunday winter arrived. It was snowing the whole day and there was like 15 cm of snow and really bad winds…

8. On monday I had to take BB#2 to the pediatric ophthalmologist. He does not need glasses and he said his eyes even improved since last year so that is great news.

9. I have no idea what we will do for new years eve but it does not seem too exciting since husband will work on the 31st and on january first too 🙂

10. Happy New years to every reader of the blog 🙂

Today the weather is amazing. 11 Celsius! and it is almost Christmas, and the sun is shining.

So some sunny pics of the Blackberry boys!

I love the lights in this photo 🙂

I took this photo this morning at 6 am. Christmas lights on one of the avenues.

1. It is finally december. I love Christmas season.

2. I went Christmas shopping about 2 weeks ago, and the card reader wouldn’t take my card at the cashier, so they told me to take out some cash, so I went to the bankomat and it was a different bank’s bankomat, but it is not supposed to matter, but I still had a bad feeling when I inserted my card. And for sure (somehow I always feel when something bad will happen) the stupid bankomat swallowed my card 😦 There I was with a cart full of stuff at the cashier, with no cash and now no card, and a 2 year old rolling around on the ground. I called my friend C. to come to the store and bring me some cash and I could at least pay for the stuff I bought.

3. I called the first bank they said since I don’t belong there they won’t do anything, so I called my own bank, had to cancel my card and had to order a new one. So my Chrsitmas shopping has been on hold, with no money, but finally my card has arrived so at least this has been solved.

4. Last week BB#1 ‘s class had a christmas DIY crafts afternoon at the school. It was really fun. We made wrapping paper, Christmas ornaments, Christmas Cards. I made the following Chrsitmas card featured on Danielle‘s blog last year:

This is what it was supposed to looked like. I made 2, one with a red ribbon and one with a gold ribbon.

5. All the crafts made by the kids and the parents will be sold at the Christmas fair this saturday at the school. I volunteered to help sell them. All the money will go to the school. I hope I will be able to do some shopping also 🙂 Maybe some nice ornaments.

You can read abou the tradition in this blog post:

So on Saturday we went to go see Santa. They both got a package full of candy. So BB#2’s new word of the day was ofcourse: chocolate (csoki in hungarian).

7. The weather has been dark and rainy so we have not been to the Christmas market in the city. I hope the sky will clear up by the weekend and we can go.

8. Tomorrow BB#1 will have swimming during his P.E. class, and the parents can go and watch. So I might go and see how he is doing.

9. One of our dear friend, in Warsaw, Poland passed away. He was a great researcher and a really nice person. His funeral is today. Rest in Peace Professor Andrzej, you will be greatly missed 😦

Here in Hungary we celebrate Christmas on Christmas Eve, december 24th. We put up the tree the same day too, and there is no Santa on Christmas. Little Jesus brings the presents. We always spend Christmas Eve at my parent’s house.

Here is our Christmas in Pictures:

My brother and his girlfriend with the fish soup he made. 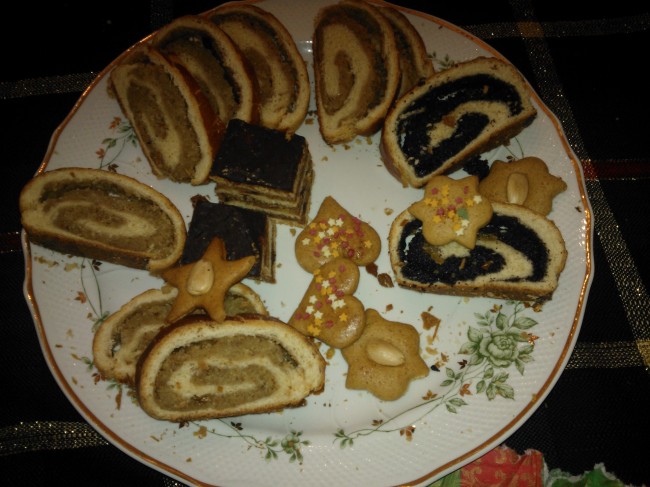 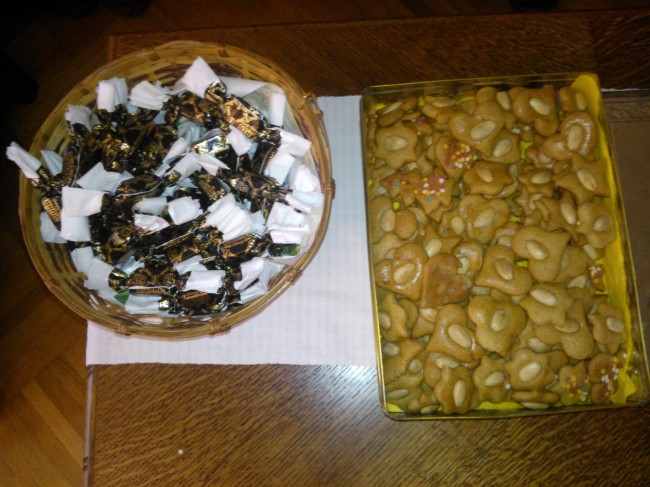 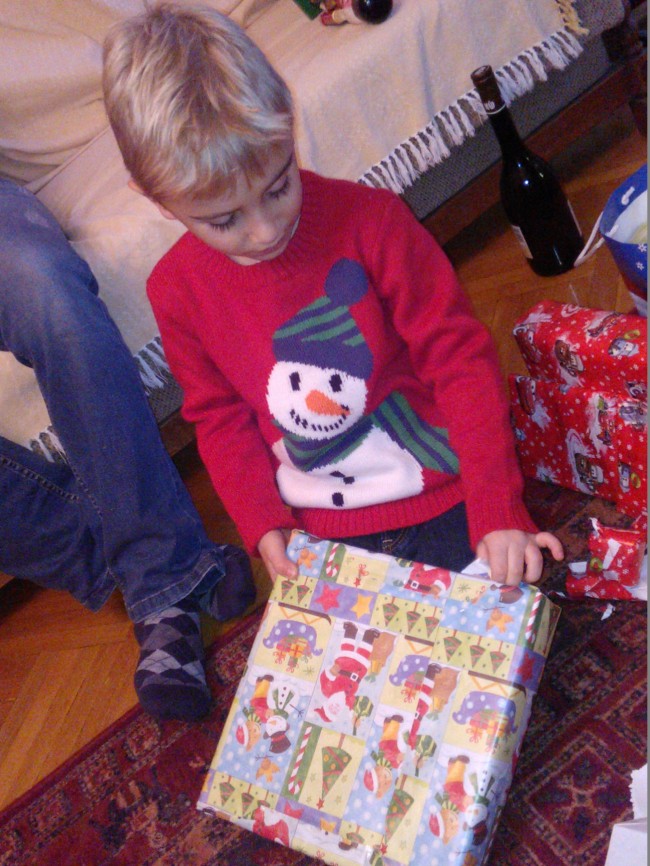